Forgetting how to swim after a long break 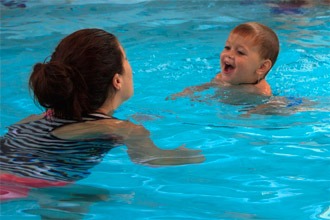 At this time of the year our swim schools receive a lot of phone calls from concerned parents about their child forgetting how to swim. Here’s an example:

“My daughter has forgotten how to swim. We went for a swim in our pool and she was scared of the water. She was OK at the end of last summer but is very clingy now.”

After a break from swimming, children who are still in the beginning stages of learning to swim often experience a loss of confidence that the water will always hold them up.

Even children who can swim experience this phenomenon.  I recall in the early 1980s I was testing a group of scouts for their swimming badge. My second eldest son was on the far side of a 25m pool getting ready to jump in. He had not been swimming for a few months and when he jumped in, he started to do the ‘Vertical Crawl Stroke.’ This means he panicked and lifted his head out of the water, which caused his legs to sink. He felt he was going to sink to the bottom of the pool, which only exacerbated the panic.

I remember thinking at the time, “I might have to jump in and save him.” He made it to the lane rope and hung on. The rope gave him enough support for him to get a breath. He called out to me, “Dad I have forgotten how to swim!” I called back, “Put your head down and the water will hold you up.” He did and then the confidence that the water will hold him up kicked back in and he was fine.

Now my son was six or seven at the time and was never in danger of drowning. It is a different matter with smaller children who are still forming that confidence. Any incident where they are feeling scared and lose their confidence will set back the development of their Personal Aquatic Survival Skills.

Let me give you another example of how a child’s confidence in the water can evaporate over a break from swimming. The incident happened at about this time of year, when the weather was warming up, and the pool temperature was more acceptable. A woman and her two-and-a-half year old grandson were going for a swim in their home pool. The boy was very good in the water at the end of the previous summer and he loved jumping and being thrown into the pool and swimming back to the side. The woman did what she had been doing with him during the summer and executed a controlled launch into the pool. The child came up screaming. The woman was shocked. It took several months for the boy to overcome that fear.

So please be aware of how easy it is for a child to forget their Personal Aquatic Survival Skills and how much damage can be done if your child is put in a situation where their current skill has been misjudged. The best way to make sure your child continues to progress their Personal Aquatic Survival Skills is to bring them back to swimming lessons and let a professional swimming instructor re-invigorate your child’s skills.