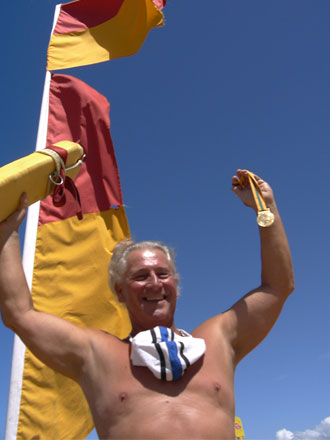 Chris, who turned 56 in 2003 is a living example of how being able to swim is a life long life saving skill when he won the Australian men's 55-59 rescue tube at the 2003 Australian Surf Titles at Kurrawa beach.

"The conditions were really testing with solid 2-2.5m waves breaking on the inside bank and up to 3m waves breaking on the outside bank, so in the rescue tube I decided to take a different course than the rest of the field. I knew that if put in a big swim across the inside gutter and then crawled along the bottom for as long as I could to go under the big waves once I hit the sand bank, I could probably go straight out to sea rather than run down the beach, as did the rest of the field, to the south to counter the Northerly sweep. The race plan paid off as once I cleared the sand bank I was right in line with my buoy. All that remained was to swim as hard as I could for the buoy. As it turned out I won it by a long way."

At the same Australian Titles Chris also won a bronze in the men's 55-59 surf race and the men's 140+ surf teams race.

Chris took a break from competition as Shapland Swim Schools opened four more swim schools over the next seven years and after completing a 500 kilometre ocean kayak paddle from Redcliffe to 1770 in 2009 with his partner Sally, Chris decided to compete in the 2010 Australian Masters Surf Lifesaving titles, once again held at Kurrawa Beach on the Gold Coast, in big seas which three days later claimed the life of a young surf lifesaver.

"The ocean was very challenging that day and I really felt sorry for the board and ski paddlers. As a swimmer you can head for the bottom of the ocean when a big wave breaks on or in front of you, however when you are on a craft you are exposed to the full force of the wave and in some of the craft events only a few competitors made it through the inside break. In the board rescue event I teamed up with Len Wood (OAM) the person responsible for getting me involved in the surf lifesaving movement back in 1966-67. I was the swimmer for the event and Len paddle the board. 50 roll overs later Len along with only one other competitor made it to the buoy. We both had to lie on the board and paddle it back into the beach and in doing so took the full force of a couple of big waves and copped a “big flogging” which ripped the board out of our hands. Fortunately we were both strong swimmers which enabled us to recover our rescue board and win that event."

"Being able to swim is a skill you can do all your life. Because the forces of gravity are greatly reduced when you swim it is an impact free exercise and it is one of the few sports you can do lying down."

Chris does have one piece of advice for all parents out in the community which could reduce the incidents of toddler drowning’s to zero. That is "Never take your eyes off your child when they are around a body of water. This includes, bath tubs, buckets of water, washing machines, paddle pools, and puddles of water and of course rivers, lakes, the ocean and swimming pools."