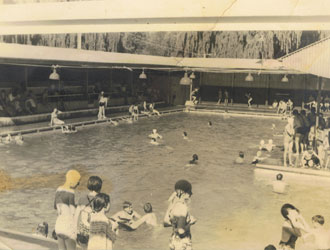 Toowoomba Municipal Baths in the 1940s.

The Shapland Story starts in Toowoomba in the late 1930's when Thomas Shapland was teaching swimming on a voluntary basis at the Toowoomba Municipal Baths. Thomas formed the Saturday Morning Club in order to introduce the children and youth of the town to the joys of being able to swim. Thomas was a strong swimmer and started out in life as a mariner. In his early twenties he survived a shipwreck off the North Coast of Queensland and along with the Captain, first mate and engineer sailed one of the ship's two open life boats 700 miles west to safety.

Thomas always had a love of the water and after he and his wife and family (including my father Bernard "Bernie" Shapland) established a life in Toowoomba where Thomas worked for the City Council's water department. This long association with the water (Thomas's father was a master mariner who sailed the world's trade routes) prompted Thomas to form the Saturday Morning Club and start teaching swimming in a voluntary manner. My grandfather also taught me to swim. Before I was able to hold the water well enough with my hands and feet he would use and old bamboo pole with a rope attached to the straps of my swim suit, sit by the side of the pool and let me play in the water so I could develop the fine motor skill necessary to hold the water with my hands and feet.

In 1947 (the year I was born) my parents Bernard Thomas Shapland and my mother Dorothy "Tuppy" Blanche Shapland (nee: Walker) secured the lease of the Toowoomba Municipal Baths and for the first time a Shapland taught swimming professionally.

The Municipal Baths had a long history and in 1947 the pool was still a fill and drain pool. This means there was no filtration plant and during the summer months the pool was filled and drained daily, yes daily. Even though the water was chemical free, sweet clean spring water it always came out of the ground under 20 degrees Celsius. A fact many Brisbane competitive swimmers who swam in that pool during the late 1940's to 1960 (when Milne Bay Memorial Pool was opened) will confirm as they gasped for air when first they dove into that cold pool. If you look closely at the photo of the Municipal Baths you will notice at the far left hand end of the pool two 4" cast iron pipes that carried the water from the pumps to the pool. 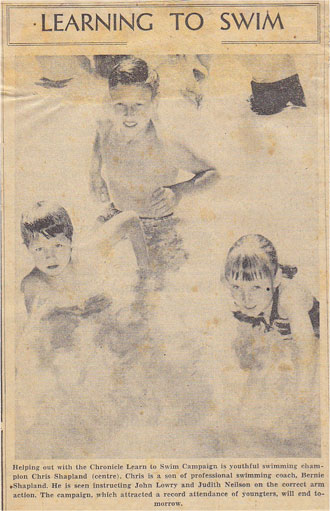 My first vivid recollections as a child was growing up at that pool, in particular the way the light shimmered on the ceiling of the house as it reflected off the disturbed surface of the pool. The lessees' quarters were part of the complex. In fact the main entrance to the pool bisected our home. On one side of the main entrance was the kitchen and canteen and on the other side was the bedrooms and bathroom.

Bernie and Tuppy set about bringing a very professional approach to teaching and coaching swimming. One of the initiatives they introduced to the town was the Toowoomba Chronicle Learn to Swim Campaign which was conducted during the school Christmas vacation period and was open to anyone who wished to learn to swim. The big attraction was it was FREE. The citizens of Toowoomba filled out a coupon in the paper and sent it to the pool where they were organized into classes according to age and ability. All who enrolled were classified into TWO categories: Floaters and Non Floaters.

The teachers for this campaign were all volunteers and mainly came from the competitive swimmers of the town. I was one of those who gave up their time over the Christmas vacation to teach swimming. By age nine (9) I had taught my first swimming lessons and have not really stopped since.

In 1960 the Toowoomba City Council opened the Milne Bay Memorial Swimming pool and my parents were the first lessees of this pool. During that time Bernie became well know nationally for his coaching prowess and was one of the first coaches in Australia to introduce "interval training" to his swimming squads. Bernie was a perfectionist when it came to swimming technique and I was fortunate to be raised in this environment and have that knowledge passed down to me first hand which in turn I can pass it on to the Shapland group. 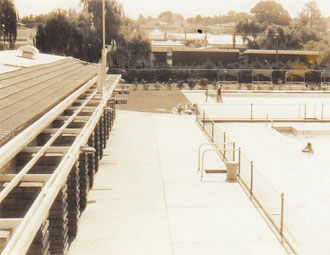 In 1967 for the sake of a few hundred dollars the Toowoomba City Council decided to award the lease of the pool to another tenderer and so a 21 year association with Toowoomba came to an end. Right up until my parent lost the lease of the pool the Toowoomba Chronicle Learn to Swim Campaign remained in place and I continued to teach swimming on a voluntary basis (in those days there were strict rules governing the Amateur status of sport and Swimming was no exception) as I could not receive any payment for teaching swimming as I would no longer be eligible to compete in State and National Swimming titles.

After loosing the lease of Milne Bay Pool my parents had a brief stint managing the Camp Hill Carina Welfare Center (a Clem Jones initiative) before Monsignor Frawley made them an offer they could not refuse and moved to Scarborough on the Redcliffe Peninsular.

My parents always had a dream to open a swim school and in 1973 the original Shapland Swim School at 26 Hill Parade, Clontarf opened for business. That swim school is still operating today.

After retiring from competitive swimming in the late 1960's I started teaching swimming professionally and was fortunate enough to be employed by Marist Brother College Ashgrove during the day which left me free to develop my private learn to swim businesses at Kenmore, The Gap, Ashgrove, Indooroopilly as well as riding a bicycle around the Gap where I taught swimming in private residences.

From 1976 until 1992 when we opened our first franchise at 50 Goodfellows Road Kallangur, I taught swimming during the summer and have lost track of the thousands of pupils I have taught over the last fifty five years.

Currently we have 12 specialized swim schools operating in South East Queensland using the Shapland, Swim in Five process honed by many many years of teaching swimming starting with Thomas Shapland. My parents dream swim school was one where the pool was purpose built (eight different depths), supplied a dry odour free observation area, clean heated water and small classes. This semi private philosophy came after years of operating out of public pools where large classes with multiple classes in the pool were the norm. Bernie often commented he wanted to get away from the "cattle dip" mentality and start making his learn to swim classes more private. A philosophy Shaplands still embrace today as we only take three students per class with a maximum of two classes in the pool at any one time.

The Shapland Story continues today as we strive to improve on what we already do extremely well and embrace the technology and nuances' of today's world. Over the seven decades Shapland's have been teaching swimming one thing has remained constant - There are still five basic steps a child/adult needs to achieve in order to be able to swim and the Shapland family continues to apply our original Swim in Five Process.