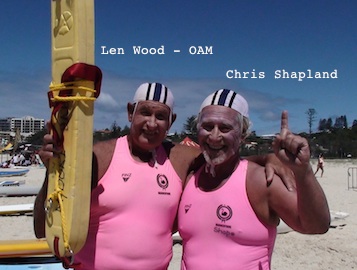 Winning three gold medals (surf race, rescue tube and the board rescue) in my age group at the recent Queensland Masters State Championships held at North Kirra made me very happy and reinforces what I have written many times which is, “being able to swim is a life long life saving skill.”

The Championships provided a platform that verified the statement. On Friday, 7 March 2014, Surf Lifesaving Queensland held their Championships, which invites all proficient surf lifesavers to compete and test basic lifesaving skills against their peers. All participants compete in the same conditions in their relevant age groups, from teenagers through to masters. I competed in the 65-69 years age group.

There is such a difference between competing in a pool swimming carnival and a surf carnival. It is considered good manners to wish someone good luck before going out to compete in any sport, however in the sixty years I have competed in pool races, I have never known luck to play a part in the outcome. It is an entirely different matter when it comes to competing in the ocean. Luck does play a part, and this is what makes competing in the ocean so much fun. In theory, it means everyone has a chance at winning. You might get caught in a current whilst swimmers ten meters to the north of you do not. Or the swim buoys in the board rescue or rescue tube events can be further out to sea at one end of the line. If you draw that end of the line then it is bad luck and you will need to swim further than the competitors at the other end if you want to win. No matter what the conditions are in the ocean, as a competitor you have to adjust to those conditions, after all when it is a real live rescue you cannot pick the conditions.

For example, the Surf Board Rescue event tries to simulate what happens in a real-life board rescue situation. For the event you need a patient (swimmer), which was me, and a board paddler, which was my friend of over four decades, Len Wood, OAM.

This is how the race is run: Each team is allocated a colored buoy located about 200 meters off shore. The swimmer lines up on the beach on a mark that corresponds to your buoy. On the starters signal, the swimmers aim to get to their buoy as fast as possible. Once the swimmer touches the buoy then their board paddler can leave the beach. It is then a furious paddle out to the buoy. When the board paddler reaches the buoy, the swimmer climbs onto the board and they propel the rescue board back to the beach. The first team to cross the finish line with both team members holding on to the board is the winner. Watch the video below to see an example of this race.

It is a fun, practical race however there are times when the race is not a lot of fun. This was the case when Len and I won the Australian Masters 60-64 years board rescue at Kurrawa in conditions that two days later took the life of Saxon Bird. The conditions that day were scary. Not the swim out to the buoys, because as the swimmer you spend a lot of time trying to crawl along the ocean bottom to get some protection from the powerful waves and to take advantage of the strong current running along the ocean floor that helps drag you out to sea. It was the paddle in to the beach with both of you on the board that is the scary part especially when the ocean was a big as it was that week. Despite a massive wipe out on the way back to shore we went on to win the Australian title by over a minute.

Len is a living legend in surf lifesaving not so much for his great skills as a swimmer, board and ski paddler, but for the fact he was a professional lifeguard (used to be known as a Beach Inspector). He was at Burleigh Heads for 9 years and then at Surfers Paradise Beach for 10 years. During that time Len has been credited with 707 official rescues. In other words Len has saved over 700 lives all because he can swim.

Len also applied his lifeguard skills for six months in Bali, where he officially saved 83 lives. If you do the maths, that is one rescue every second day. He is such a humble man. The thought that ordinary people do extraordinary things keeps reverberating through my head when I think of what Len has achieved in terms of the number of lives he has saved.

In a way your child's swimming teacher is also a life saver. I have lost count of the number of children who come through our swim schools and then use those skills to either save their own life or the life of someone else. If your child is taught the correct swimming technique right from the start then your child can be "safer in the water for the rest of their lives."

So Friday the 7th of March 2014 was a great day in the ocean for both Len and me. Between the two of us we won four gold and two silver medals. The best part of the whole experience was “It was fun.”