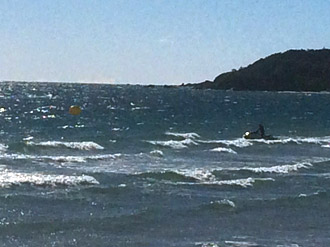 On Sunday the 4th of May 2014 I competed in the 65-69 years age group in the 2.2 kilometre swim from Watego’s Beach to the Byron Bay surf club. This annual swim attracts some 900 competitors and the 2014 swim marked the 26th anniversary of the race.

Normally it is a very pleasant swim featuring clear water and good visibility. This year was not the case; in fact in all the years I have been competing in open water swimming, the conditions on Sunday the 4th were the worst I have ever competed in. The wind was blowing from the North West and was gusting to 35 knots. This meant the surface of the water was severely chopped up and made breathing, staying on course and visibility very challenging.

If your swimming technique restricted your breathing side to the right then you really had a problem because every time you turned your head to the right to take a breath the choppy water made it very difficult to avoid a mouthful. Fortunately I can breath to either side so it was easier to breathe to the left, but even then the amount of chop blowing over your shoulder made the timing for the breath critical.

As a matter of interest, Shapland Swim Schools’ Policy regarding Personal Aquatic Survival Skills is to teach your child to breath comfortably to both sides. If they ever face a real life survival swim they are much better equipped to turn their head for a breath away from the wind direction and associated chop. 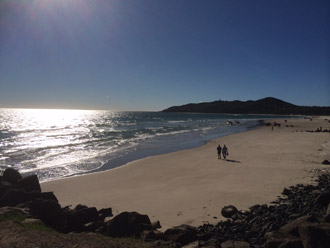 One of the secrets of open water swimming is to be able to swim as straight a course as possible. The conditions on the surface of the water made it almost impossible to see the buoys marking the course. This meant that I needed to be looking at the mountain range in the distance and the stand of pine trees to the north of the Surf Club to stay on course. The chop on top of the water was simply too big to see any real distance. It wasn’t until I was about 200 meters from the last yellow turning buoy (about 2 metres in diameter) that I could see it. A most welcome sight.

The event is open to all who are over 12 years of age and are able to swim the 2.2 kilometres. In recent years the event organisers have added a shorter 800 metre swim as a means of introducing swimmers of all ages to the joys of open water swimming.

“Aren’t you worried about sharks?” is a question I am always asked. The answer is no. This does not mean I do not think about sharks however the thoughts are fleeting because it is important to stay as relaxed as possible while you swim and concentrate on your technique, your course, your pace and getting enough oxygen into your lungs. Worrying about sharks stops you from doing this and as a result tires you out faster than normal. I must admit this year a photo of a 3.5 metre great white shark biting the outboard motor of a fishing boat off Pottsville (only a few kilometres north of Byron Bay) was not the most desirable thing to see before competing in an ocean swim.

John Dommett, who owns the Shapland Swim School at Kallangur is a good friend of mine, and took part in the swim as well. He loves ocean swimming and swims at least twice a week at either Mooloolaba or Noosa Heads. We both agreed that it was a very challenging swim.

I managed to get third in my age group and was placed 203rd out of the 863 competitors who completed the race. The conditions forced a lot of competitors not only off course but also out of the race and they were brought back to the beach by one of the many support craft.

Just being able to complete the course is an achievement and proves once again that being able to swim is not only a great form of non-impact exercise but also a skill that is life long. The reason Shapland Swim Schools exists is so we can impart Personal Aquatic Survival Skills to your child, so they can be safer in the water for the rest of their lives.