Not only did Brendan Hall win the final of the mens 400m freestyle S9 and break the world record; he did it convincingly. Brendan swam a well judged race. His early pace avoided any excess build up of lactic acid so he was able to power home in the later stages of the race. Brendan was learning to swim at the Shapland Swim School Kallangur under the expert guidance of John Dommett when an advers… read more 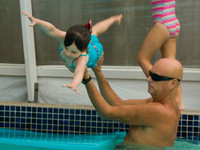 On the 31st of August 1992 the Shapland Swim School at 50 Goodfellows Road Kallangur opened for business. With a very young family and a large financial commitment, John and Sally, in what was an act of faith that Hilton and myself could duplicate the Clontarf model at Kallangur, committed to opening the first ever Shapland franchise. So it was all hands to the pumps with John taking on at least s… read more 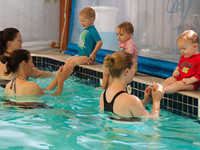 Parents have witnessed 101 children save themselves Since the Shapland Swim School at Sinnamon Park opened in January 2000 Pamela has kept an accurate record of the reported aquatic accidents children have had. They include situations where they fell into a body of water and the children used the skills they learned at the swim school to not panic, and automatically turn around and grab the side… read more 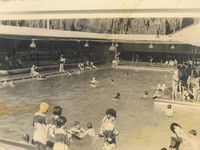 Toowoomba Municipal Baths in the 1940s. The Shapland Story starts in Toowoomba in the late 1930's when Thomas Shapland was teaching swimming on a voluntary basis at the Toowoomba Municipal Baths. Thomas formed the Saturday Morning Club in order to introduce the children and youth of the town to the joys of being able to swim. Thomas was a strong swimmer and started out in life as a mariner. … read more 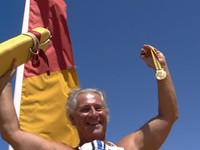