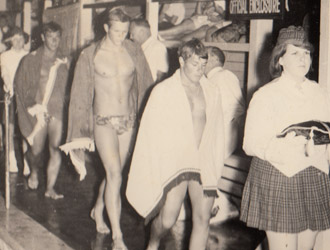 Greg and I had very similar backgrounds in that our fathers were swimming teachers and coaches back in the late 1940s and on into the 80s. Greg was one of the best swimming teachers I have ever seen. He had the gift all great swimming teachers have and that is the ability to recognize exactly what skill that child needed to learn. Lessons with Greg were fun and he got very good results in a relatively short period of time.

In the very early days Greg suffered a bad staff infection in his lungs and was lucky to survive. As part of his recuperation the doctors recommended he take up swimming.

Initially Greg trained with his father Neville in the 25m pool Nev had built at the family’s motel “The Highway Oasis” in Mermaid Beach on the Gold Coast.  Greg and his sister Jo-Ann soon outgrew the 25m pool so Nev moved his squad to the Southport Olympic pool for the morning session and continued with the 25m motel pool for the afternoon session.

As Greg continued to improve his parents sent him to Sydney to train under Harry Gallagher. Soon Greg outgrew that program and while continuing to live in Sydney moved over to Don Talbot where he stayed for the rest of his career.
The photo above was taken in 1967 and shows the place getters in the men’s Queensland open 400 meters freestyle. It was a memorable night for me, as I had not been beaten over this distance at the state titles since 1960. Greg and my brother Brian were the same age (16 years old) when the photo was taken and this was the first time they had competed as seniors.

After winning a bronze medal in the 400m freestyle at the 1970 Commonwealth games Greg continued to compete in both the pool and surf until he had to give it away. Greg suffered from chronic ear problems and retired from all forms of swimming competition in the early 1970s.

We remained close friends for the rest of his life. Australian swimming has lost a champion however Greg has left a legacy of thousands of children who had the privilege of being taught their Personal Aquatic Survival Skills by a real master swimming teacher.